The demonstration was possible thanks to an initiative of the italian magazine IoGioco that allowed the players to try games like Lord of Hellas, Bunny Kingdom and Outlive (just to name a few).

In this (100% italian) board game we will play as a powerful mage of the Black Rose Order, fighting into the competition to determine the new Magister.

Every player must max out his resources (magical and strategic ones) not only to survive the incoming battles that are waiting for him in the rooms of the Guild, but also to gather points and be the first to reclaim the victory.

In Black Rose Wars the main focus is on magic and we will find six (6) different schools, ready to push to the limits their emissaries. The schools are:

There are an incredible number of spells for every school and this make guessing what the opponent mage will cast almost impossible.

Furthermore every spell card contains two versions of the same magic, both with different effects, upping the playability and the magic customization of every aspects of the game.

Each one of the mages that we will play is strongly characterized and gifted with unique abilities, getting them a starting point for the uncoming battles.

In the core game we will have four (4) characters:

As we said before, every Mage is unique. After we choose the Mage we will have the possibility to choose between two builds, this aspect rise up even more the playability too.
Tessa, for example, can transform parts of her body in a weapon, using them for melee attacks or even became a full scale abomination, maxing her physical abilities. Jafar will try to keep himself as far as possible away from the other Mages, avoiding battles and gathering points with Quests (yes, there are also Quests to complete). Rebecca will use her necromantic skills both for attack and defense. And Nero will use his powerful destruction spells (an example? Somebody said Meteors???)

Magic schools are six, but we have only four mages available. We guess that there will be at least two more, an illusionist and a consipirator. At the Kickstarter campaign launch we will see if they will be added more, as add-on or included in the base core box or as unlockable stretch goal.

But Ludus Magnus Studio did not stop here and introduce a very important element, able to diversify EVERY game from the previous one, the Grimoire!

Every mage will start with a base cards set from his class, but at every turn he will upgrade his hand with spells taken from the others magic schools (the six school that we have talked before). This means that Nero, for example, can choose to sacrifice part of his destructive potential to raise his mobilty or defense in every moment of the game, with no limitation (there are no opposite or forbidden schools, like into the Dungeon and Dragons 2nd edition).

After we make our chooses about our favorite magic school, we are ready to play!

First we create the guild terrain, putting on table the exagons, one for every room, starting from the central room, The Black Rose Room and then we add the player’s private rooms as last ones.

Our battlefield is now ready, it is time to draw an Event Card, that will influence all the game turn of every single player, draw a Quest Card, one for each player, and finally choose from our hand which spell we will use in our turn.

We must carefully plan every movement in the guild rooms and the use of our spells, misdirect our enemies, surprise them with long range spells or accumulate points thanks to the Quest.

Every Mage has four spell slots: one for a Quick Spell and three for the remaining spells.

It is possible launch the Quick Spell in every moment, while the other three must be casted in sequence, so the one on the second slot can be used ONLY AFTER the first one is casted and so on. This make important not only the choosing on the spells, but also the disposition on the player board. Every unused spell will not be available for us on the next turn. The used spell will be forgotten, sent in our memory, and we will must recover them with cards or abilites to reuse them again.

To win we will have to gather enough black rose points, defeating enemies, destroying guild rooms, completing quests and annihilating enemy summoning, all with a good dose of spell-lobbing!
The first player to arrive at 30 points will be elected Guild Master, receiving the honors from the other players…till the next game!

Thanks to the Moon Phases (first moon, second moon and third moon), the game will gradually change, raising the overall difficult level.

Mages will be able to Summon Powerful Creatures at their service (creatures that will have an activation phase on their own, after the mages action phase): Undeads, Altars, fighting Cerberi, dangerous Andromedas and demonic Malacoda.

Every guild room hides a secret, a bonus activated visiting the room. But there is more, is possibile to gather points and bonus effects using powerful spells to destroy the room!

Player are not alone on their run to victory. During the game the guild itself can gather points and if it will reach 30 black rose points first, then it will means that another mage has been more capable than the ones sitting at the gaming table, making the game a loss for all the players! So will be really hard to avoid magic battles all the time and the mages will try to gather victory points defeating the other players as soon as possible!

Miniatures are amazing, but also every other aspect of the game is set on an incredible quality. Every room tile is astonishing, we have rarely seen something comparable and each room will have their own slots to add the damage tokens inflicted by the mages (colored wooden cubes).

There is a lot more to say about this game, but we assure you it seems really incredible for solidity, playability and overall components quality.

We can’t wait to give you a complete review of the game, in the meantime……we’ll give you an exclusive preview of something that Ludus Magnus Studio has presented for the first time at Play 2018.

Ladies and gentlemen, mages and enchantresses, we present to you Crono!!!

Crono is a super boss that can appear in every moment of the game and that will change the  game from a pure competitive to a mixed coop-competitive. Mages will join forces to not succumb to an enemy that can single handledly destroy each one of them, BUT they must still try to win the game in the meantime! 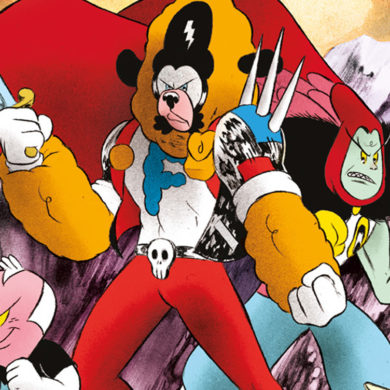