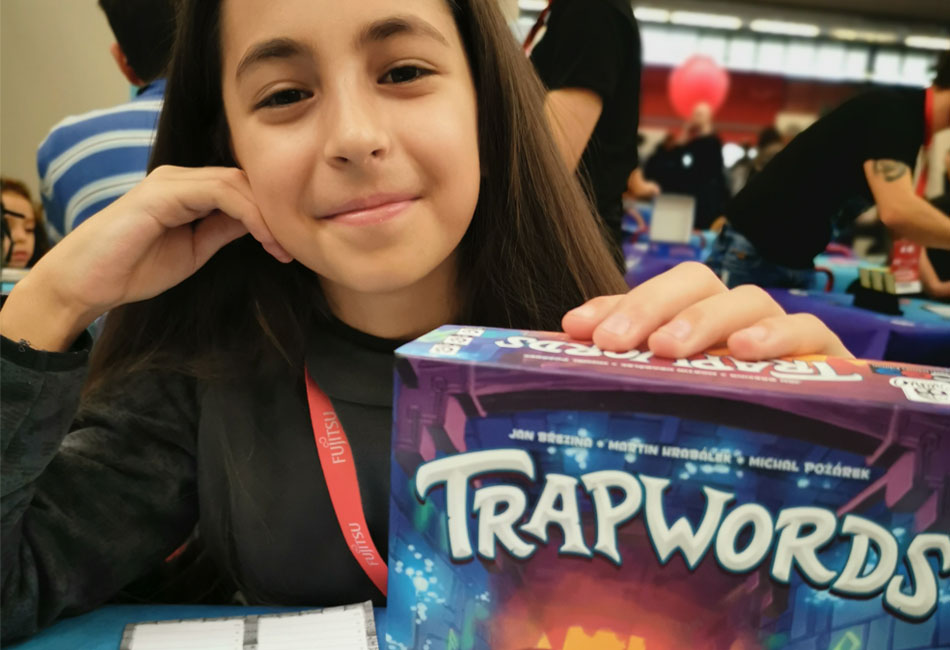 At Play2019 we played at: Trapwords

Many of you in your family or with friends will have played Taboo, a board game that is still found in supermarkets and shops but was very popular, especially a 10/15 years ago.
In Taboo we were divided into teams and one team member, in turn, drew a card from a deck. A word was indicated on the card, to be guessed by the rest of the team and a series of words that could not be used to make it guess. The opposing team “surrounded” the active member of the opposing team and, looking at the card in his hand, they were careful that he did not use one of the forbidden terms.
Trapwords is a team language game published in Italy by Cranio Creations, which starts from Taboo as a game concept, but which at the same time departs from it by expanding it and adding a more engaging setting, more options and more depth.

As a group of lost adventurers in a fantasy world, in turn a team member will have to make the rest of his companions guess a word, not through drawings or mimicking it, but through suggestions (words or phrases).
But be careful !! Your opponents will not be there to watch you win the game, they will set traps (even these linguistic). In fact they will choose words that cannot be used by the partner who tries to make the rest of his team guess the word of the turn. And of course being traps the active player will not know them until it is too late having triggered one! (insert evil laughter)

The game does not continue linear as in Taboo, but every time the team guesses the word advances on a path/dungeon and going forward, from room to room, the difficulty increases.
In the first part of the path, the traps that the opposing team will be able to place will be three, in the second part four, and they will gradually be more.

Furthermore some dungeon rooms hide additional pitfalls, special rules, and at the end of the course, in order to win the game, you will have to challenge a monster/final boss !!
The final boss, always of fantasy inspiration, will bring with him further restrictions, which will make it really difficult to defeat him and grab his treasure and victory!

Even the materials of the game are great, the cards with the words to be guessed contain different ones and should be placed inside a little book that makes only one visible. It may sound like bullshit, but they are those crap that make you fall in love with a game!