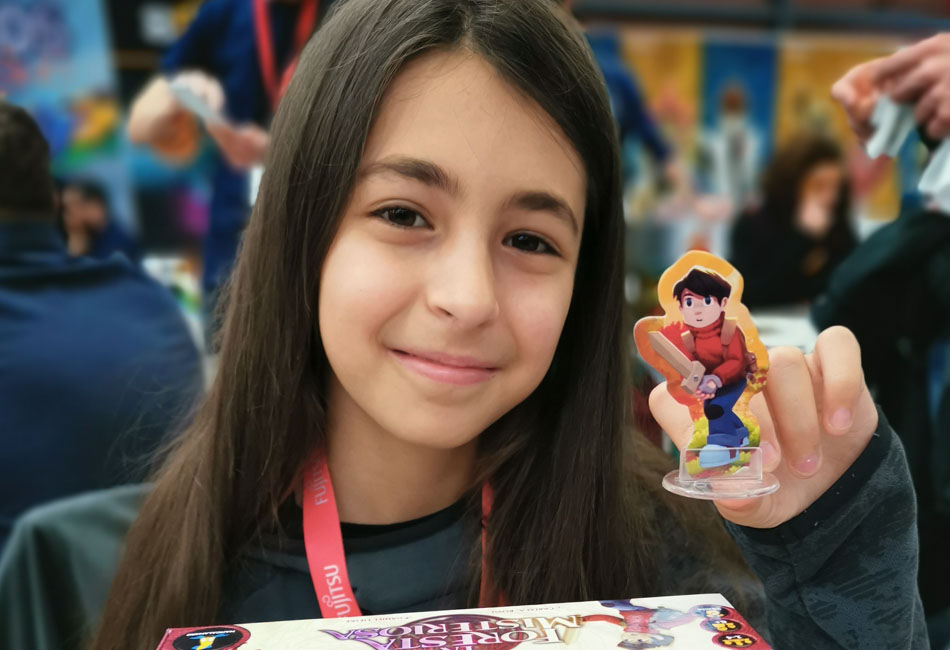 At Play2019 we played at: The Mysterious Forest

Little Jonas has to go through The Mysterious Forest with only his trusty backpack and will have to collect other gears during his way to overcome this great adventure.

The game setup is very simple, all you have to do is lay out the forest tiles, creating a linear path that will lead to face the final Boss in the last card.
On each card there are symbols that the participants of the game must try to memorize.
The face-down tiles are in fact shown one at a time and the players after having walked through the memory all the tiles (ie having turned them all), including that of the final Boss (more complex than the others), will pass to the second phase of the game: the dice roll.

The key to success will be the collective memory of the players!

All the players at their turn will throw dice, customized for the game, and at each throw they will have to select the objects, coming out of the throws, with which to fill Jonas’s backpack.

At the end of the throws, when the backpack is full of objects, they will have to retrace the path in the Mysterious Forest, turning one card at a time this time and matching the objects placed in the backpack with those on each card. Passing from card to card you will arrive at the final Monster present on the last card, but to reach it there will be over 20 objects to remember and the path will certainly not be easy.
Fortunately, one of the faces available with dice rolls will be a jolly, really able to save the game in more than one occasion!

Along the way Jonas will also be helped by a mysterious Wayfarer who will allow him to exchange objects with others at his disposal, so many times the throwing of the dice had put sticks in the wheels.

The game may seem simple but for the target audience it is not.
The Mysterious Forest is a nice board game for young players and families, to play then either alone (among youngers) or together with their parents.
We tried it with a party of four players, two adults and two children and we had a great time succeeding in defeating the Final Boss by just a breath !!!!